The rise in the number of cars and motorcycles in Kuching had been too significant since its elevation to city status in the 1980’s. this is in tandem with continuously grows especially in terms of basic infrastructure, facilities, and social services. The development of Kuching moves along with economic activities leading to job creation to become the main attraction for the young people from the rural areas to settle down. The economic prosperity has led to more people owning cars and motorcycles which caused frequent traffic jam and shortage of parking lots in certain areas in the city.

Kuching, experienced a significant rise in the number of cars and motorcycles especially when it became a necessary for people to own one because of the distance between their home and working place. Based on the current situation it has caused a serious jam and parking congestion in the city centre. If there is no action to resolve this issue, it will cause more problems such as parking offence or traffic congestion. This study will take an issue regarding limited car parking space and to explain the situation in the city.

The problem of congested carparks in certain areas of the city is getting worst yearly. For some cases, there might be a few car owners would do irresponsible action in order to get their car park and proceed to do personal matter without thinking of the effect from their action.

In view of the many complaints received from car owners in certain areas with regard to congested parking spaces within the city central areas. MASA decided to do a study to investigate the problems faced by the car owners and to identify the causes.

The public transportation services are getting improve especially for bus services. While Uber and Grabcar was introduced to Malaysia in the early of 2010s as another alternative for the citizen. All of these can be used to reduce the use of cars in Kuching. However, it is still not enough to counter the parking space issues in this city as owning a car is still the main choice for Kuching’s citizen.

The problem of parking space in Kuching is heavily crowded until some of the car or motorcycle owner irresponsibly park their vehicle by the road side which it affects the traffic especially during the peak hour. Kuching with certain areas is busy with economic activities such as shopping mall, restaurants, cafe, bank, and etc. Economic activities in this area have attract people to come and visit the area. However, due to parking issue has caused difficulties toward them.

In order to reduce the stress or frustration among the car owners in this city, MASA had to conducted a study to know how serious the problems of congested parking areas. For this purpose, we selected three areas for this study namely; Main Bazaar, Satok and Padungan.

1.1 Objectives of the Study

The objectives for the study are:

This study was to find out the problem of congested parking lots and how it affects the traffic. This kind of case study might get less focus in any previous research as it be seen as less impact toward the state and society but it definitely will bring impact toward the car park management if this research manages to come out with proper roots and causes of the parking issue.

This will give us a better understanding on car park issue and at the same time manage to reduce any illegal or reckless parking. The affected driveway also can be controlled if fewer vehicles manage to be park in good manner. In short, this study will make a contribution toward a better parking management and to ensure car owners do not waste time and gas to look for parking lots.

A literature review based on the past research findings and available data in order to know the issues and for further research.

A series of observation was done on several areas to understand situation of congested parking in the city.

Interview is the final method being used in this research, there are few stakeholders who involved in this interview such as City Council (DBKU), Police Traffic Department, parking warden, business operators and car users.

The scope of the study covers certain parking spaces in Kuching; that are mostly congested with cars and motorcycles. Based on one observation the areas are Main Bazaar, Padungan and Satok commercial centre. Besides that, this study also tried to observe the situation based on certain period which is during the morning, lunch hour and at night.

This location has been chosen for this study because it is one of the busiest places in Kuching where many people are coming for many reasons such as shopping, recreation, foods, and spices. The area covers from Electra House to Chinese Temple where many cars were seen during the observation. This place has become important for people because of its entity that serve a lot of things especially for tourism such as souvenir, kek lapis, water fountain and Darul Hana Bridge.

An observation for this place will be conducted from Satok Bridge until the fly over as this area contains shopping mall, restaurants, workshops, banks, offices, and accessory shops. This place is significant for this study as it attracts lot of people to come and many cars were presence in this area during the observation.

Padungan also being chosen in this study because of high crowd were seen during the visit as many cars parked around this area. This place contains café, hardware store, super market, restaurants, hotels, banks, office, nightclub and souvenir shops. An observation toward this place covers from Grand Margherita Hotel to Fire Station that is near to round about.

Based on the finding, these locations (Main Bazaar, Satok and Padungan) were busy at certain time especially during business hour from 9.30 am until lunch hour. Improper car parking in this city is causing stress and trouble to other road users when a car park at the side of the road as it become congested and disrupts the traffic flow. The curb parking led to the congested traffic when lot of car owners do the curb parking on the side of the road which becomes a burden and cause a single lane road only which it will disrupt the flow of traffic. The jammed traffic will occur due to that kind of parking especially in somewhere that is narrow street or
downtown (Hossam El-Din I. S. Ahmed 2017).

Based on the feedback from Police Traffic Department, DBKU and other respondents, all of them agreed that congested parking only occurs in the morning at 9.00 am and until lunch hour. The causes of congested parking are due to high number of visitors, less parking space and the attitude of the car owners.The factors that lead to congested parking are people coming in for groceries, breakfast and lunch, shopping mall and other necessary things. The location also becomes tourist attraction which contribute to the parking congestion. However, there are places provided for people to park their car such as Plaza Merdeka shopping centre or Saujana Parking which can reduce the congestion in the area. While parking space in Medan Pelita, according to Puan Azilah Hani from Land Custody and Development, are occupied with
seasonal parking. Based on the observation, Medan Pelita is strategically located in between lot shops, hotels, restaurants and offices.

According to all of the respondents, congested parking in this location occurred during business hour especially from between 9.00 am to 4.00 pm. This area also having less parking space that led to parking congestion. Besides that, Satok is a commercial centre where many people coming for their own personal matters such as shopping, breakfast and lunch, groceries, workshop, and to the bank. The car owners attitude also become one of the main factors that led to congestion in the area. For example, they commit to illegal parking such as double park, curb parking, exit lane parking, and yellow line parking. Another issue that occurred was motorcycles parked in the car parking spaces and sometimes two or three motorcycles might take different spot of car parking spaces which cause car drivers could not park in the provided area. This incident
led to illegal parking when the car owners could not park their vehicles.

In the location, the congested area is in Jalan Padungan especially from the Padungan Arch. This area is too narrow and less parking space provided but it is still become one of the most visited places in Kuching due to many restaurants, banks, café, shops, and market. Based on the respondent’s feedback, the congestion only occurred during the day which it started from 7.00 am to 4.00 pm and become worst during the lunch hour.

Lot of people came to this location just for temporarily, however it affects the traffic flow when too many illegal parking happens in the area. Most of the cases area double park, improper parking and parking on the yellow line. The attitude of the car owners is the main contributor to congestion because there are two location that provides parking space; Taman Kereta and The Hills shopping mall but they refuse to park in the provided area due to long distance of walking and to avoid pay for parking. All of the respondents agreed that congested parking only occurred for certain time only. 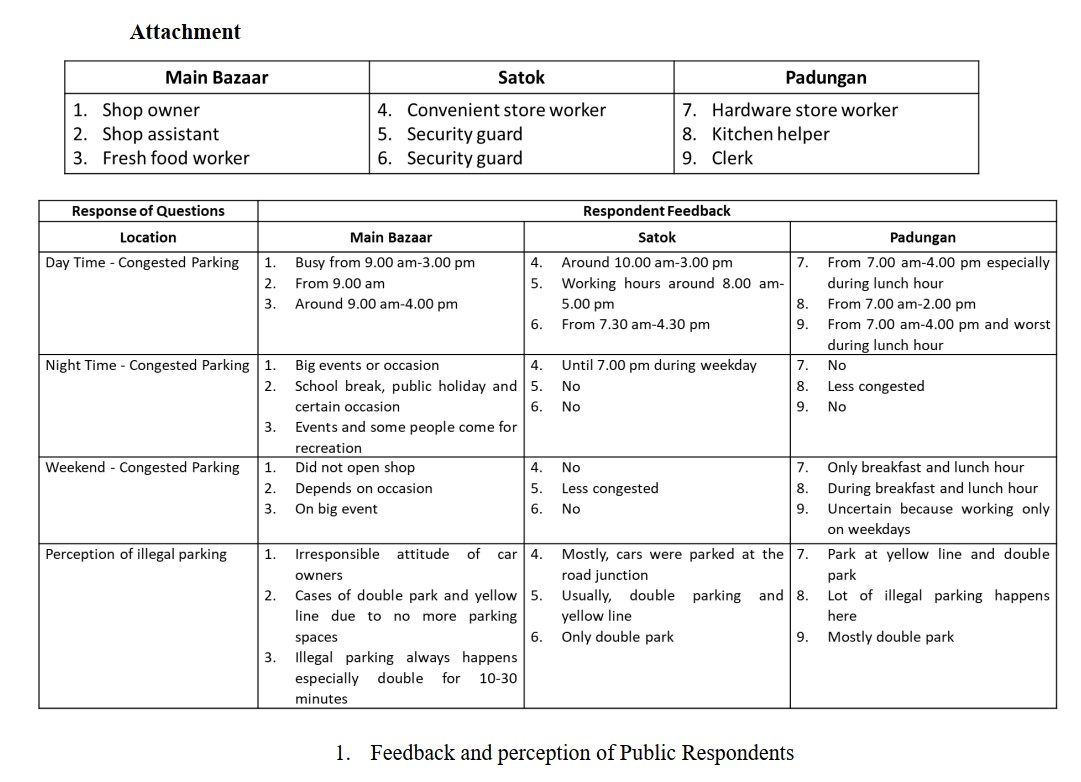 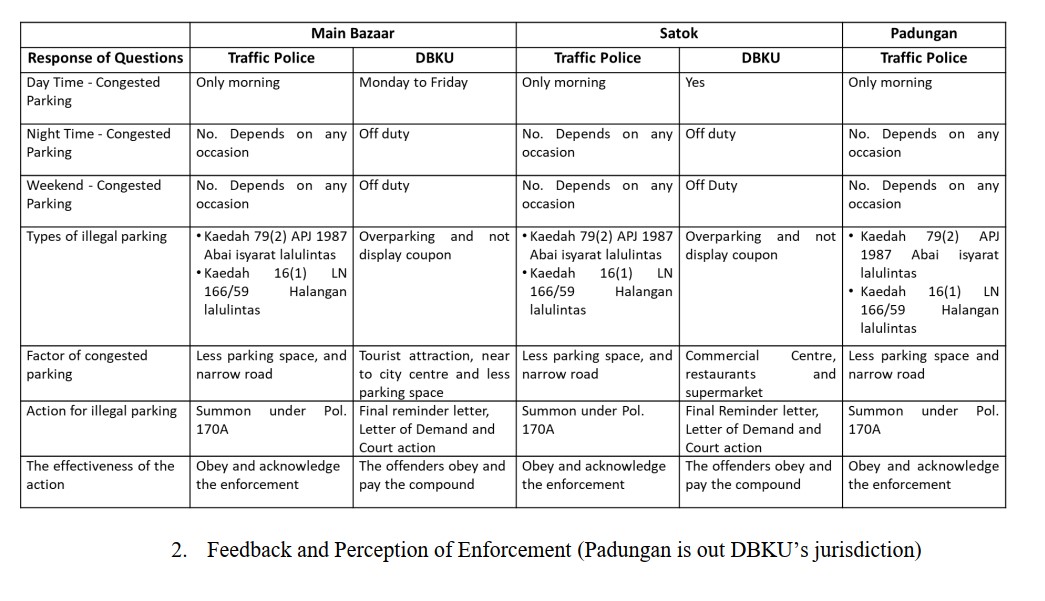 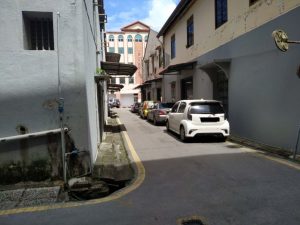 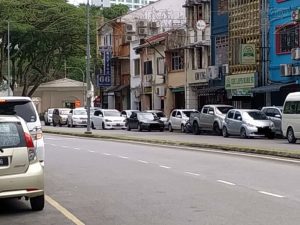 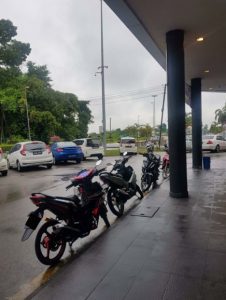 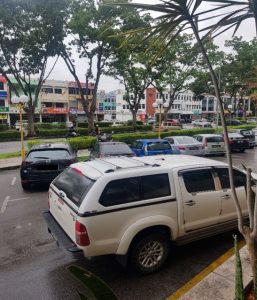 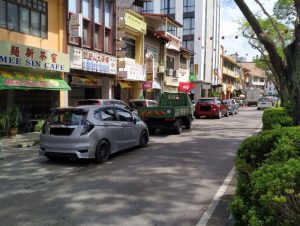 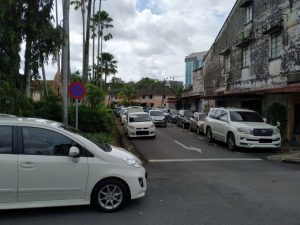 Photo 6: Curb parking on the exit lane in Padungan